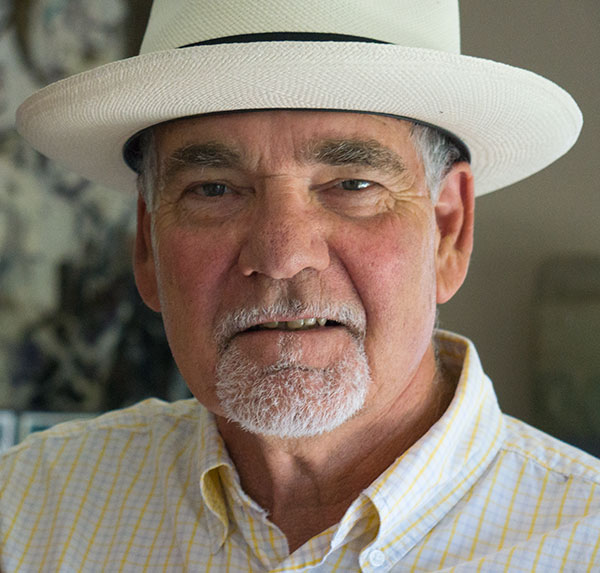 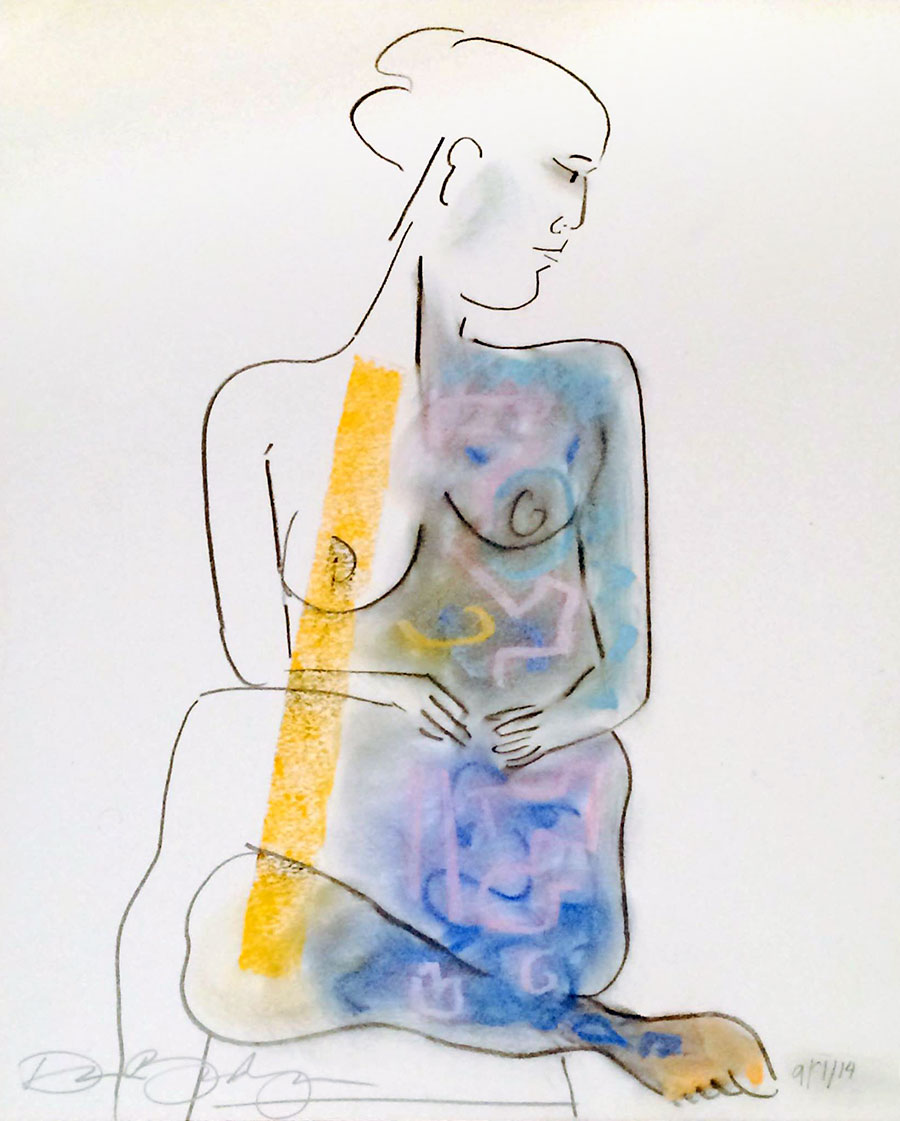 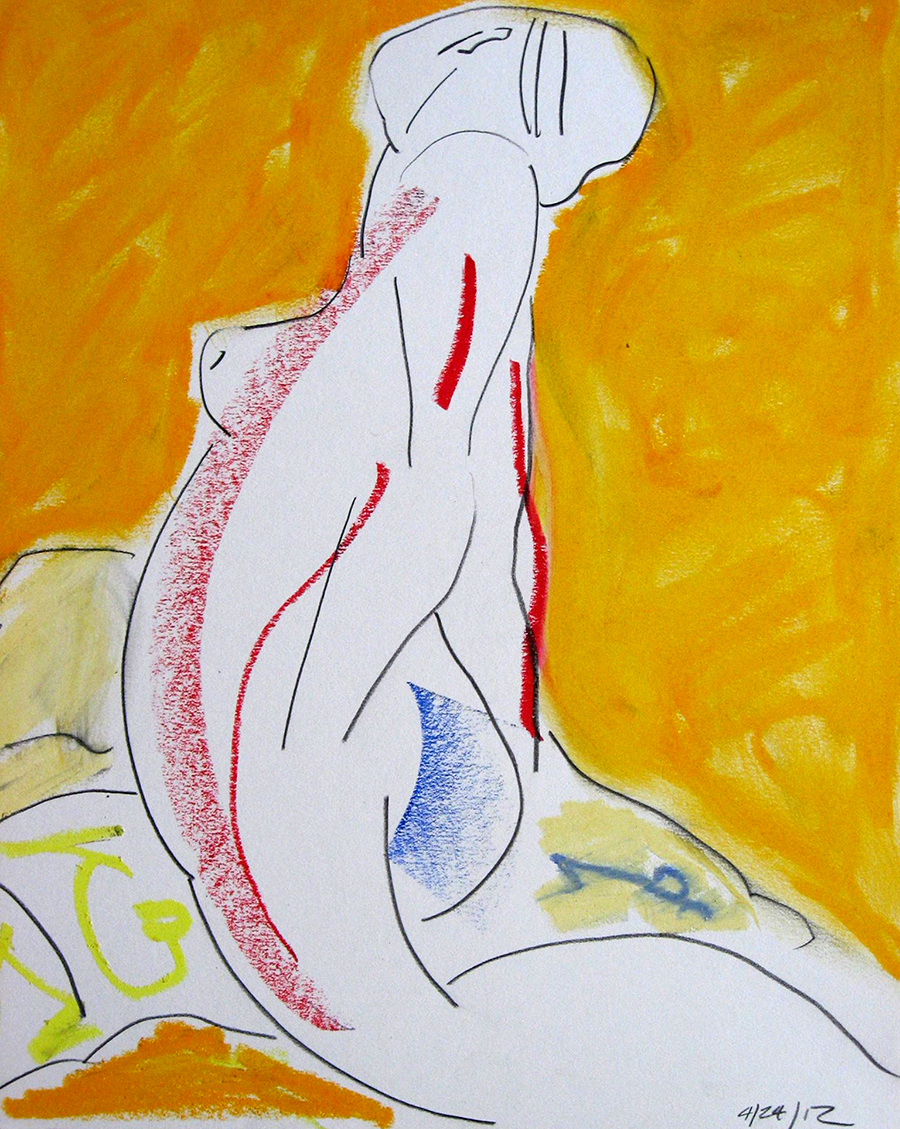 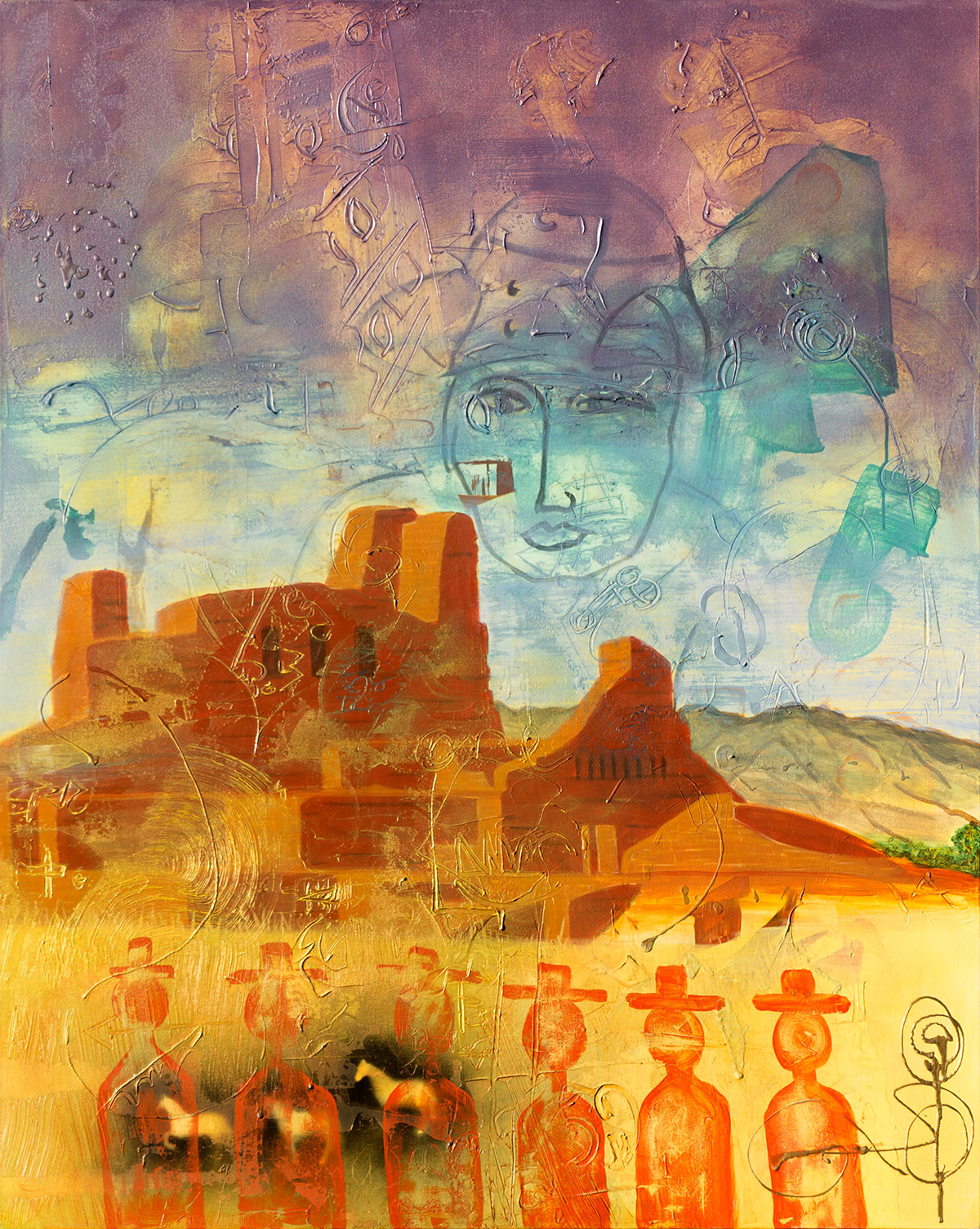 I am a visual person, and I’ve been given the gift of painting. It is my spiritual practice: I empty my mind and let the experience begin, with no plan, simply working instinctually.

I love working with color. My work allows me to express my inner vocabulary; marks and symbols flow out of me. There are three points that form my inner philosophy:

And throughout this process of creating I have profound satisfaction and am deeply enriched.

As a family we often visited museums and galleries in San Francisco and Los Angeles. Always seeing as much art as we could, and it was during those early field trips that I saw Picasso for the first time.

The countryside around San Luis Obispo is absolutely Gorgeous!

I remember as a kid going out of the town limits to the countryside—typical golden hills dotted with oaks and valleys with small farms—old red barns and rambling weathered fences—with my Mom while she painted watercolor landscapes. She tutored me from a young child on how see to the world around me—the light, the composition of a scene or view.

Later on my mother started working on new directions in her studio. The studio was a cool place for me to play, and the energy while she worked on new pieces was exciting. This was a seminal time in the formation of a new generation of California artists of whom my mother was a part.

Oil painting on canvas, she painted mostly the figure and still lifes with an occasional portrait. There were always models and friends, and people of interest, around being painted or drawn. This was the Art-School-for-Me-through-osmosis, and looking back I see the foundation of my career was being laid here.

When my mother married her second husband, John Badgley—the Architect—I was exposed to a whole new world. 3-dimensional art! Art you live in! Art and Architecture! Both were hot topics in the late 50’s and 60’s and we were surrounded by a milieu of artists, professors, and intellectuals. The “Beat” movement was in full swing and we spent time in Big Sur with those artist friends and their kids. It was “wild times” always!

As a family we often visited museums and galleries in San Francisco and Los Angeles. Always seeing as much art as we could, and it was during those early field trips that I saw Picasso for the first time. He got my attention!

With the sixties approaching, the Abstract and Figurative Expressionists were forging their way into San Francisco. Painters like Hassel Smith, Nathan Olivera, Richard Diebenkorn, David Park, Joan Brown, and Elmer Bishoff, among others, were doing amazing things with paint!

My mother and her friends were doing the same thing on the Central Coast. Those friends, Channing Peake, Howard Bradshaw, Dorothy Bowman, and Jack Oggsberger, were all very close to our family. Channing Peake had actually worked with Picasso! He drew bulls, painted in a bold style, and he knew other famous Artists. He Introduced me to Rufino Tomayo, a master Mexican painter, at an opening in San Francisco in the late 70’s. Awesome!

Mom and Channing Peake had a special creative relationship,  later reflected in a show entitled, “A Place and Time”, was presented at the San Luis Obispo Museum of Art in 2012. That show took me right back to my childhood, watching Mom paint. I would later—in the late Seventies—spend a week with Channing Peake in his studio in Santa Barbara, CA. We painted together, talked about abstract art, went to museums, and met collectors. He was my idol for a long time to come!

In 1965 we moved to San Francisco where I started my life as a Painter! I got hooked to the hard edge style popular at the time, which I believe came to from moving to the Big City. I used this time to also teach myself Color. The fields of color between the straight lines were a good place for me to develop my Spectrum, so to speak. I also attended City Collage of San Francisco and Collage of Marin where I developed my technique and understanding of different mediums. Eventually I evolved from the hard edge geometric work into the more fluid, abstract style that I saw when I was young—Abstract Expressionism, and I am still that mode of painting today, though greatly evolved, incorporating more textures and layering, and working with the human figure as well.

As for Architecture? I’ve developed a house painting business specializing in the use of rich colors, texturing and faux finishing. My day job has allowed me the opportunity to paint in large structures in the third dimension and more fully understand color, light and texture and how they change in space, time and different weather!

Using what I learned from my parents (art & architecture) at an early age, and developing my sense of color and my ability to visualize as an artist, has allowed me to work on some of the most beautiful houses in California and New Mexico—from majestic Victorians to multidimensional Pueblo style houses and everything in between. All of my learning to see, feel, and express, from my youth in the pastoral Central California, growing up in the psychedelic Sixties in San Francisco, refining my art in Sonoma County, California and finally arriving at the source—Mother Earth—the High Desert of New Mexico!! 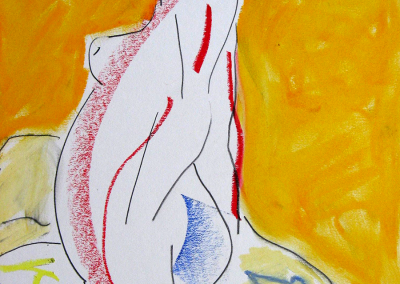 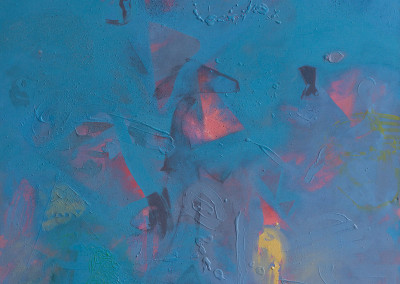 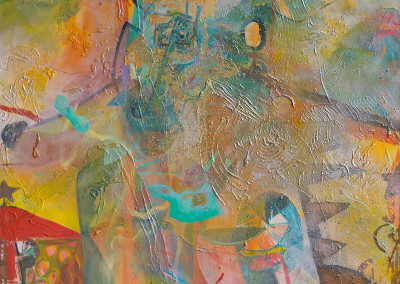 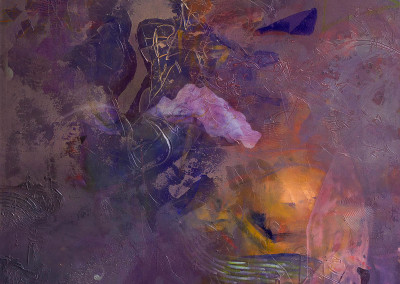 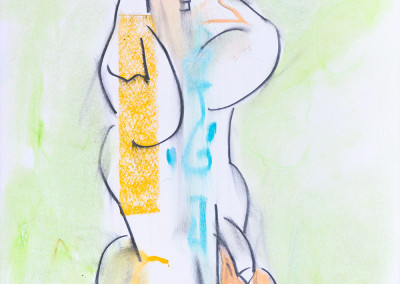 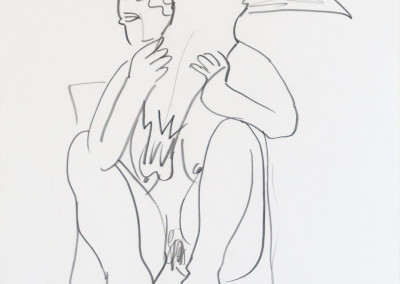 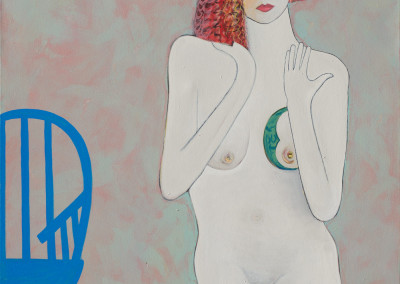 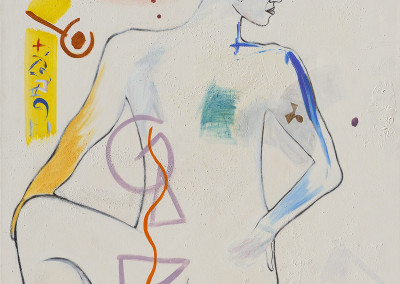 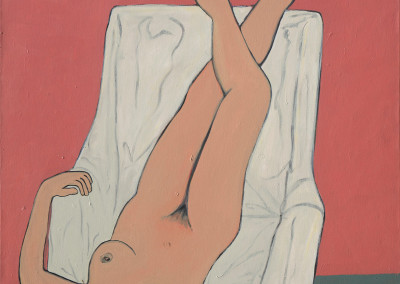 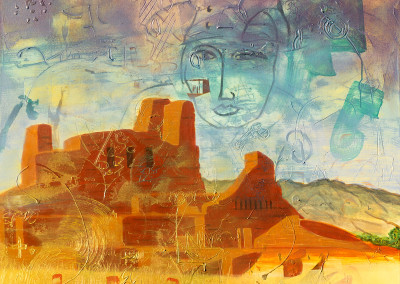 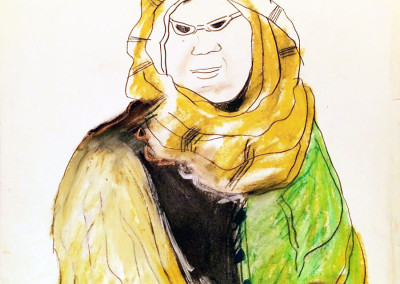